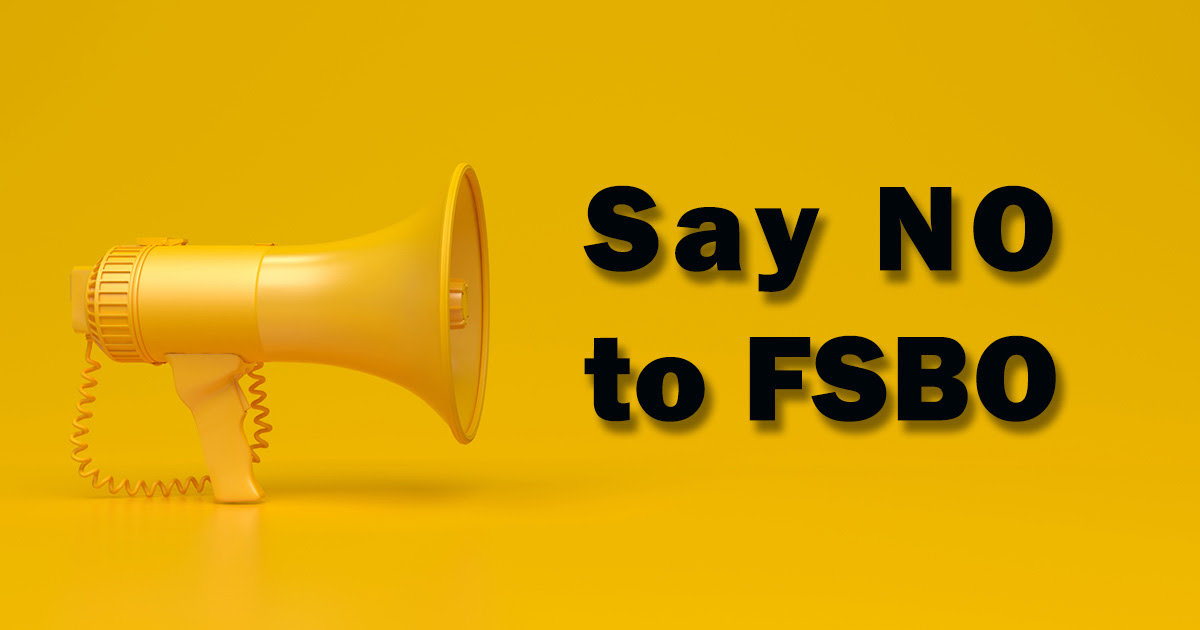 To understand the reasoning behind why a homeowner should not sell their home by themselves, we need to identify the motivation.  Probably, more times than not, the homeowner wants to “save” the cost of the commission.  It certainly represents a significant amount of money.

In 1981, homes sold For Sale by Owner represented 15% of the homes closed while 85% were agent-assisted.  The percentage of sellers handling their own homes alone has declined over the decades to only 8% of homes sales in 2020.  Interestingly, half of the sellers knew the buyers and the other half did not.

The FSBO sellers who knew the buyers, who were predominantly a friend, relative or neighbor, had a market time of less than a week and received 100% of the asking price, less expenses of course.

According to the NAR 2020 Profile of Home Buyers and Sellers, 50% of FSBO sellers determined the asking price of their home by recent home sales in the area while slightly more than 1/3 used an appraisal. 41% of sellers stated they did not want to pay a fee or commission as the reason they sold it FSBO.  Another 30% did so because they had a relative, friend or neighbor who wanted to buy their home.

A significant problem encountered by For Sale by Owners was exposing their home to the marketplace.  They run the risk of selling the home for a lower price because it is not marketed to the highest pool of available buyers.

Negotiating on their own behalf is another concern many for sale by owners share.  There are so many different things as well as people with whom to negotiate.  For instance, besides the sales price in the contracts, other negotiable terms include financing concessions, closing and possession dates, inspections and earnest money.  However, the negotiations could continue well up to the moment of closing with repairs, appraisals and other unforeseen things.

While the seller might feel uncomfortable negotiating directly with a buyer, there could also be negotiations with the appraiser, inspectors, mortgage company or escrow company.  The layer of separation that exists between the seller and other parties is the real estate professional.  They are trained to de-escalate sensitive areas so that feelings are not hurt as well as acting as a go between so the way something is said can be minimized.

Difficulties experienced by FSBOs include negotiations with the buyer, not familiar with the process and standards that are involved in the 92% of the transactions that are agent assisted. 89% of Sellers say they were satisfied with the service their agents gave and would use them again and recommend them to others.

A seller should realize the motivation of a buyer wanting to deal directly with a seller without an agent.  They are trying to save the commission but both buyer and seller cannot save the commission.  The more knowledgeable and possibly, the better negotiator will usually benefit the most.

13% of the sellers were contacted directly by the buyer.  It is conceivable that these buyers may have been trying to take advantage of an unknowledgeable seller to eliminate competition and purchase a home at a lower than market value.

In a seller’s market, a FSBO can sell their home.  The question will be whether they received the highest price with the best terms and the fewest problems.  Protecting a large financial asset is important and sellers deserve the peace of mind that a real estate professional provides along with the fiduciary duties that accompany them.

The median price achieved by For Sale by Owners is considerably less than the median price sold by agents.  While there may be other factors involved, it certainly introduces the question “is the FSBO is selling below fair market value?”

Before embarking on the sale of your home by yourself, talk to a real estate professional or possibly two, to get as much information as possible to make an informed decision.  Your objective should be to maximize the proceeds from the sale.  For more information, download the Sellers Guide.